Fasten your seatbelts, this is a long-haul flight…

In an AMA Interview from the hosts Lisa N Edwards and Sean from Hardforkers, Juan Otero, Travala CEO, dropped some exciting news. Did you catch it? In this blog, I will discuss the key points and speculations revealed by the CEO himself! The full interview is at the bottom.

If you’re unaware of Travala at this point, Travala is a Binance-backed, blockchain-based travel booking platform where initially you could use the utility token AVA to book your journey/activities. Now, it’s so much more!

Juan Otero is the Co-Founder and CEO of Travala (Previously of Booking.com /European Commission). He dropped some big news and several breadcrumbs about what’s to come from him and the Travala team. The team itself is something to highlight; at around 50 staff members from key industries including, travel, finance, and blockchain it’s already an amazing team.

Travala started in 2017 and now has over 3 million travel products in 230 countries and territories covering 90,124 destinations.

Travala has truly developed a spectacular platform for booking your holidays/activities and the word from Otero is they’re in talks with Major players in the aviation industry to bring you to the ability to book flights directly through the Travala site! More on that below!

Needless to say, the Corona pandemic has halted the travel industry for the last year and a quarter. However, this hasn’t stopped Otero and his team.

From developing their tech, building a user-friendly platform, and making some strong partnerships Travala has seen 5x growth in revenue year on year and has continuously been profitable for the past 6 months despite the “RONA”.

Post-Covid, I’m sure we can all agree that the new world will see travel levels ramping insanely, and don’t worry, they’re ready…. ready for…

So what contingencies do they have?

To cope with the pandemic they have a contingency, even if it goes on for years! So far $2million has been raised from thousands of investors supporting the project. Cash flow is still there too so Otero believes they can outlast covid with no worries. Travel partnerships keep rolling in and Otero states that he expects in Q3 of this year travel will be becoming fairly normal…

Q4 will be a ‘tsunami’ of demand

Yes, you read that right!

As announced in the interview, soon you’ll be able to book flights just as you would book hotels through their site. Creating a well-rounded package platform with some major players in the industry

Otero boasts they have ‘Access to 600 Airlines!‘ so there’s some real context to this announcement.

When asked, ‘Will this be announced in Q1?’ by Edwards,
Otero revealed that they’re ‘talking about weeks not months’.

Get your AVA secured for take-off people!

Edwards speculated partnerships with BA, Emirates, and United. Although Otero didn’t outright answer, he didn’t dismiss her remark either. I know right? Major.

If you didn’t catch it, 2 days ago Travala announced a new partnership to integrate STRAX token on their site as a form of payment! Now STRAX holders will benefit from access to the 2.2m hotels, 600+ airlines, and 400k activities in more than 230 countries whilst benefiting from savings of up to 40%!

“Travala provides a fantastic platform for those wishing to utilise cryptocurrencies without the need of exchanging to fiat. Their platform is an excellent example of how a solution leveraging blockchain technologies can disrupt the travel industry whilst providing a familiar and trusted user base.”

This partnership aims to continue promoting travel and cryptocurrency adoption with over 3 million travel products now available to book with Tezos (XTZ) through Travala.com.

On Feb 16th Travala announced yet another toke to integrate on their platform – Frontier’s FRONT token.

Philip Arthur Moore, COO, Frontier, said ‘At Frontier, we can think of no better partner to bring exclusive deals for travel, homes, flights, and other activities to our community of FRONT holders. Our team is fully remote, genuinely global, and looks forward to utilizing Travala’s massive ecosystem for team meetups and community events.”

During the interview, Lisa asked about the possibility of Travala bringing out their own Crypto card, and Otero suggested that a Travala branded card is something they’re ‘looking into!’ How cool will that be?

Travala started as a crypto-only site with ava token. Now, other cryptos bitcoin, eth, ripple are involved and since then has brought massive growth.
Travala also now accepts credit cards and other traditional payment methods.

At the beginning of the month, Travala announced that ‘millions of Binance users will now be able to enjoy the new contactless, borderless and secure cryptocurrency payment technology designed by Binance when booking travel on Travala.com’.

The integration of Binance pay is currently in its BETA phase but is still fully functional through the Binance app.

Otero hinted that in the next few weeks
there is gonna be some more big news
with another
Binance announcement.

In the Interview, Edwards asked,
‘Will AVA integrate into the Binance app with Travala so you can spend directly?‘
Otero said they are ‘currently working on this!’ along with a number of other integrations coming to millions of users.

With Travala’s main demographic being crypto users they really have formed the ultimate partnership with Binance. The plan is that users will be able to buy/pay for travel through their Binance login and be able to pay with 2 clicks.

Edwards followed up with:
‘Will there be incentives for using this way? Gift bags, discounts to Binance users?‘
Otera said there will certainly ‘more to follow’ on this!

BTW Binance is Travala’s largest shareholder. If you’re not a Binance user now is the time to get signed up if your planning to travel in the future at all!

Trip Advisor Viator – In October last year, a strategic partnership was announced making more than ‘400,000 experiences – including activities, attractions, events, and tours – bookable with BNB, BTC, and more than 30 other cryptocurrencies’.

The announcements keep on landing and here in the flight tower, I’m sure we’ll struggle to keep up the way Travala is going! Here’s some brief info on their other partnerships:

“This strategic partnership also makes Travala.com one of the largest OTAs in the world in terms of the number of travel products available, which now includes a range of unique travel experiences.”

Singapore airlines – Otero may have dropped the ball here, or I misheard, but I’m pretty sure he mentioned Singapore Airlines by name… did anyone else catch that?

Expedia – Travala integrated with Expedia summer of last year. You can read more about this partnership here.

Airbnb – Otero revealed that an Airbnb partnership is possibly coming as well as several others that he can’t disclose as of yet.

Smart users – because that’s what you are!

Up until around the beginning of the year I can’t say I’d heard of Travala, but thanks to Adam here at findmeacrypto I’m all set and locked in as a Travala smart user!

So what is a smart user?
Smart members (loyalty members) lock-in or stake AVA on the Travala platform for a set period of time. Depending on the level you go for depends on the discount you receive but across the tiers a 24% bonus monthly payout in AVA and travel credits is standard.

The AVA price is growing, be Smart! Travala plans to continue to add value and offer the best travel rewards out there in comparison to other major providers. They’re ‘transparent from the get-go’ and 24% APY is very very generous!

Travala wants us all to be part of the growth of their system and will reward us, the consumer, along the way too.

With 3k users staking currently it makes you wonder about the AVA Market cap… the market cap started at $100 million and through quarterly burns is sitting around $45 million with the aim to get to $40 million to reduce inflation. What will they do next?

Otera said, ‘When the cap is reached they will look into that‘ which suggests there’s already a plan in place here, he’s a clever guy!

Travala ultimately plans to champion crypto integration with the travel sector and to ‘repair the broken relationship between travel supplier and traveler’; implementing blockchain technology from payments to loyalty rewards, transparency, and reviews. With recent integrations with TEZOS and Chainlink to name a few, we’re bound to have a smooth flight.

Essentially they want to take down the monopoly of the select few major agencies who currently control the travel industry and give power back to the consumers/travel suppliers – ‘bringing communities together’.

At present, Booking.com operates on 25% margin, Travalas’ operating around 10% margin.

This blog would not have been possible without the amazing interview featured below!

Cheers Sean
Thanks to Sean from Hardforkers. If you haven’t checked out his Youtube I highly recommend it!

WE LOVE LISA!
Lisa N Edwards is an Author, Actress, Producer, Screenwriter, and Crypto financial guru! You MUST follow her on Twitter / Subscribe to her Youtube and also check out her financial freedom guide Thousand to Millions! ‘The only way to make money… is to make your own!!!‘

No wonder she only sleeps about 5 hours a night!
Oh and Lisa, one more thing… If AVA hits $100 I’m holding you to that tattoo!

Now, if there’s one interview you watch this week make sure it’s this one! 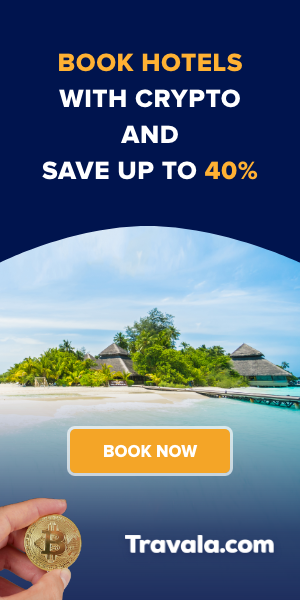